No Widgets found in the Sidebar Alt!

Thank you for checking out my site. I am so excited to have you here as I share my thoughts about life, mindset, motivation and wellness (mixed in with a little bit of faith)! I am an ACE certified trainer, fitness expert and IFBB Bikini Pro who has a passion for fitness and public speaking. I have a Masters in Communication Studies and have been competing and coaching women on some level for the past 7 years. During that time I have had the opportunity to be featured and write for several publications as well as spread my passion for fitness on television shows as well!

SO listen sister…We all have “Stuff”- like the ughhh uncomfortable things we don’t want to talk about. Life is not easy…. even though everyone seems to have it all together on social media, right?! (insert eye roll)

Well I hope that something on these pages speaks to you and allows you to follow your dreams and live your best life- all while knowing you are NOT alone.

How I Got Into Wellness…

When I started college, I was living a fairly sedentary life. I was eating fast or processed food at most meals and slowly started to gain weight on my petite frame. So one day, I decided to do something about it. The key word is- I. Over the years, I have learned that no matter how bad everyone else wants something for you, if you do not want it, then it will never happen.

In 2007, I began my fitness journey. For years I heard stories about my father running for miles at a time without stopping. This motivated me to get into running. Each time I came home from college, I would go on long runs with my dad. This made working out an enjoyable activity for me. I quickly became a distance runner- winning the women’s division in several local 5ks. To this day, my father and I still run together. I have wonderful memories of running along the canal of State Road 84 in Florida with my father. Those memories will always be with me.

In 2009, I ran my first marathon with my father. This was the first major milestone in my fitness career. After a hip injury due to stress from the race, I began looking into strength training. I would regularly attend group fitness classes and would soak up all of the information that I could about new moves and how to train your body effectively.  In 2010, I got certified by the Recreation Center  at the  University of Alabama to teach strength based classes. Later, I received my group fitness certification from the American Fitness and Aerobics Association.

In December of 2010, I bought an Oxygen magazine at the airport while traveling home to South Florida. It was there that I saw some of my current fitness idols posing at an awards ceremony for a Professional Bikini International Federation of Bodybuilding (IFBB) competition. This was something that I had never seen before. The women were sexy, strong, and defined. The Bikini division,  created in 2009, had women who were not as muscular as the women in physique, fitness, and figure. They were supposed to look like fitness magazine models. I had always been interested in modeling, and now I was into fitness…what a perfect combination! After doing some research, I set my goal the very next week to begin training for my first National Physique Committee (NPC) Bikini competition. I joined a local Crossfit gym (Headhunters in Tuscaloosa, AL) and had professional training for the first time in my life. Ever since then I have been hooked to competing.

After qualifying for nationals at my first show, I began to compete more and wanted to hit the national stage in the beginning of 2012. However this industry is also not cheap. In order to get me to my national show, I needed to find  a sponsor and along came Celsius. Working with them has allowed me to live out my dream of competing on a national stage, being a fitness model, being in a commercials and on TV, and a spokesperson. I would be lying if I said my communication background did not help me get this position. If it were not for my communication training, stage presence, and work ethic, they would have overlooked me. Because of this opportunity, I have been blessed. I have been carrying on my passion after graduating from college through writing, competing, mentoring, and educating those around me on the wonderful world of health.

Fast forward a few years later: I began training with Shannon Dey from Bombshell Fitness. They have helped me to sculpt a physique I am proud of. On July 5th 2013, after having competed in several large regional shows in order to get exposure, I obtained my Professional status at the 2013 Team Universe Pro Qualifier in Teaneck, New Jersey. With several Pro shows under my belt, in 2015 I qualified for the IFBB Bikini Olympia (the Super Bowl of bodybuilding). From 2016-2018 I had the honor of being an athlete for the – DYMATIZE Nutrition!

From there I became a VIP Coach for Bombshell Fitness which is an all women’s wellness program. It has been great getting to work with these women and help them navigate fitness and life! More to come for sure- stay tuned! 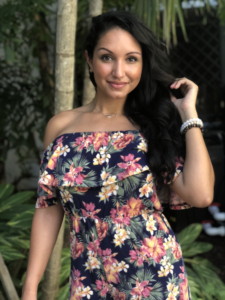